(TELESUR) – Clashes ensued Wednesday evening at the Venezuelan Embassy in Washington D.C. between representatives of the international NGO Code Pink who have barricaded themselves in the embassy and supporters of the right-wing Venezuelan opposition outside.

Opposition groups prevented basic commodities such as food from entering the embassy on May 8. The Collective of Protection of the Embassy threw a backpack from a window to be filled with food from the outside, but the opposition intercepted it. It was later recovered after scuffles between opposition members and the police, teleSUR correspondent Alina Duarte said.

Electricity was also cut off at the Venezuelan embassy and it was not clear who was behind the power outage but activists inside the embassy blamed it on U.S. authorities. Carlos Vecchio, the envoy to the U.S. of opposition lawmaker and self-proclaimed “interim president” of Venezuela Juan Guaido, described this as “a small victory.”

Vecchio also said he has already taken necessary measures, or correspondences, to ensure the members of the international NGO Code Pink evacuate the building.

The Collective of Protection is in Venezuelan territory because the Venezuelan government authorized the group to enter and defend the facilities after United States authorities supported the entry of officials appointed by Guaido.

The activists barricaded inside the embassy say the U.S. is attempting to engineer a coup against Venezuelan President Nicolas Maduro. Those outside say that Guaido, who with the backing of the United States declared himself “interim president” in violation of the constitution, must assume the reins of the diplomatic mission. 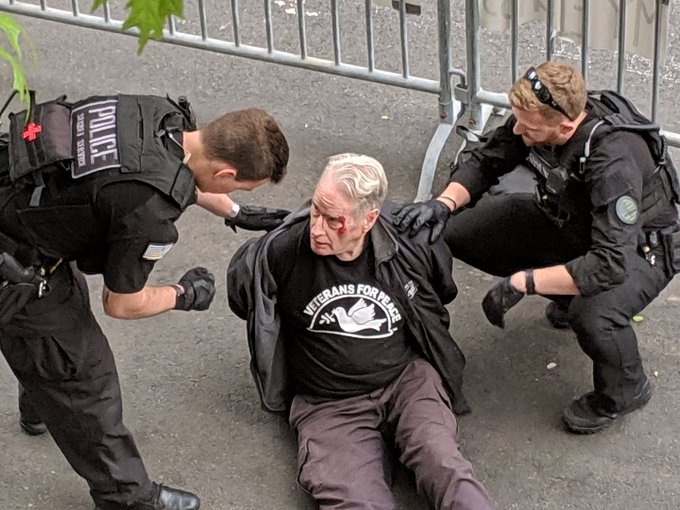 The latest standoff comes less than two weeks after Guaido led an attempted coup against Maduro and after it failed to oust the leftist president, he has been publically saying that would ask the U.S. to intervene into the country.

According to the State Department, those inside the embassy without authorization are considered trespassers. However, the Vienna Convention of 1961 bars U.S. security forces from entering the embassy and forcefully removing anyone.

Venezuelan Foreign Minister Jorge Arreaza issued a statement Wednesday asking that the state department comply with international agreements. “Again we demand the U.S. State Department comply with the Vienna Convention on Diplomatic Relations and to protect the building of our former embassy in Washington, avoiding aggression against guests who are avoiding an illegal occupation,” Arreaza said in a tweet.