Earnings of wealthiest 10 men ‘could buy vaccines for all’

This amount would be enough to prevent everyone in the world from falling into poverty because of the virus, and pay for a vaccine for all, the NGO said.
Its report found the total wealth of billionaires was equivalent to the entire spending by all G20 governments on recovering from the virus.
The charity is urging governments to consider taxes on the super-rich.
But while the fortunes of the wealthy may have soared during the pandemic, there have also been some notable contributions to the emergency response by the world’s richest people.

What is in the report?

Oxfam’s report, the Inequality Virus, has been published as global leaders gather virtually for the World Economic Forum’s “Davos Dialogue” meeting.
Unprecedented support from governments for their economies saw the stock market boom, driving up billionaire wealth while the real economy faces the deepest recession in a century, it says.
Worldwide, billionaires’ wealth increased by $3.9tn (trillion) between 18 March and 31 December 2020 and now stands at $11.95tn – which is equivalent to what G20 governments have spent in response to the pandemic, the report adds.
The 10 richest people, whose fortunes rose by $540bn since March 2020, include Amazon founder Jeff Bezos, Tesla founder Elon Musk and Facebook founder Mark Zuckerberg.
This compares with the world’s poorest, for whom recovery could take more than a decade. Oxfam estimates that between 200 million and 500 million more people were living in poverty in 2020, reversing the decline in global poverty seen over the last two decades.
“We think that this is… an opportunity to do something radical about building back fairer to think about wealth taxes, to think about corporation taxes, to think about increasing the basic social floor for every citizen,” Danny Sriskandarajah, Chief Executive of Oxfam GB, told the BBC.
With reference to the UK, he said imposing a tax could raise millions.

Yes – some are. There have been a relatively high number of charitable mega-donations since the pandemic began, with celebrities, sports stars and business leaders responding to the Covid-19 emergency.
In an October report, UBS said 209 billionaires had committed a total equivalent to $7.2bn from March to June 2020 to fight Covid-19. 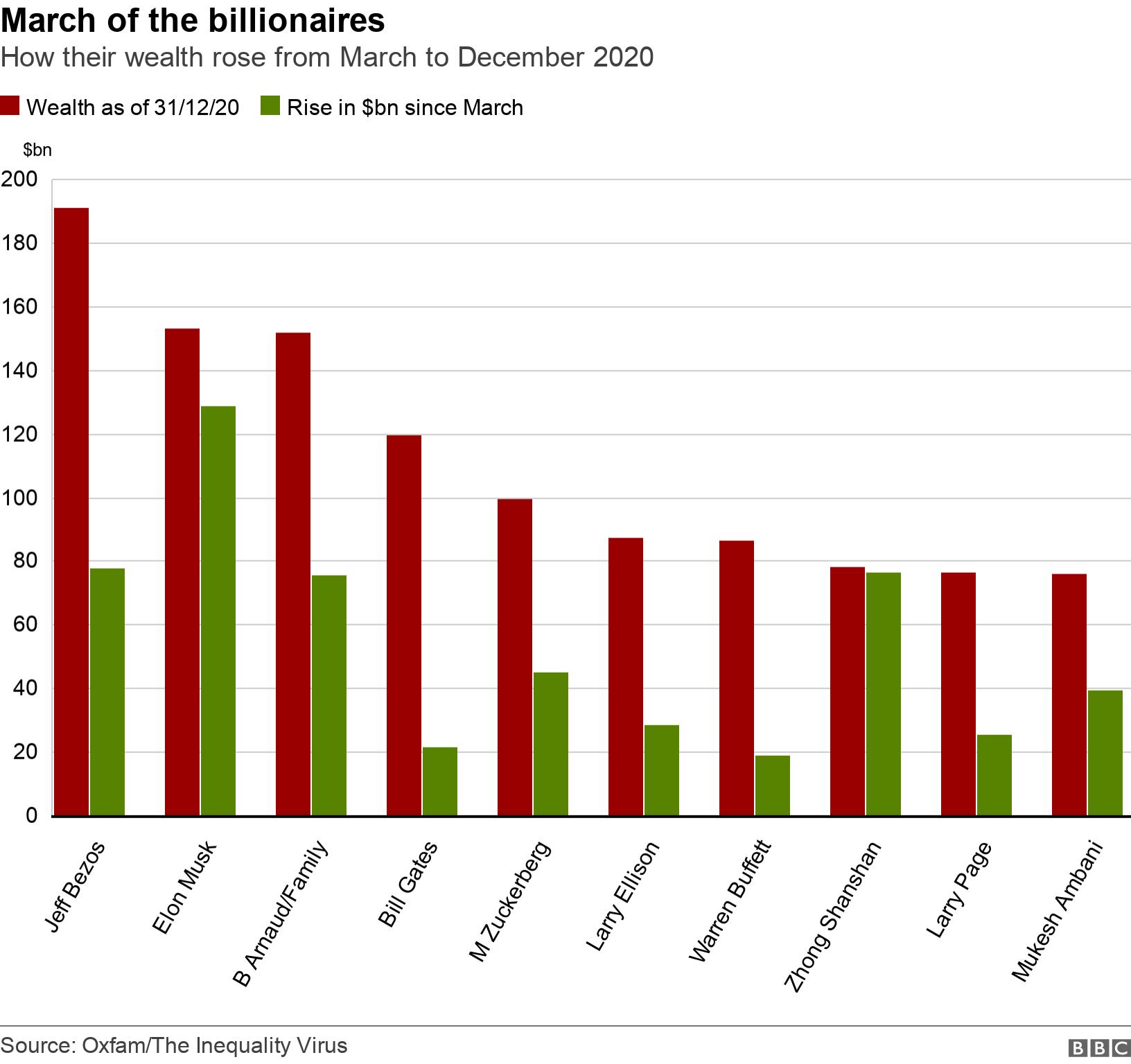 “They have reacted quickly, in a way that’s akin to disaster relief, providing unrestricted grants to allow grantees to decide how best to use funds,” the report added.
Last month, MacKenzie Scott, the ex-wife of Jeff Bezos, revealed she had donated more than $4bn (£3bn) to food banks and emergency relief funds in four months.
In a blog post, Ms Scott said she wanted to help Americans who were struggling because of the pandemic.
As of June last year, Mr Bezos was said to have donated $125m to the coronavirus effort.
Twitter co-founder Jack Dorsey announced in April that he was moving $1bn of his assets into a fund to support pandemic relief efforts and other causes. This represents about a quarter of his $3.9bn net worth.
Harry Potter author JK Rowling has donated £1m to help homeless people and those affected by domestic abuse during the pandemic.
Meanwhile, Microsoft founder Bill Gates and his wife Melinda have committed $305m for vaccines, treatment and diagnostic development through their charitable foundation.

The Bill and Melinda Gates Foundation is also the third-largest donor to the World Health Organization.