With all votes tallied, Ms Ardern’s centre-left Labour Party won 49.1%, bringing a projected 64 seats and a rare outright parliamentary majority.
The opposition centre-right National Party won 26.8% in Saturday’s poll – just 35 seats in the 120-seat assembly.
The poll was originally to be held in September but was postponed by a month after a renewed Covid-19 outbreak.
Ahead of Saturday’s vote, more than a million people cast ballots in early polling, which opened on 3 October.
New Zealanders were also asked to vote in two referendums alongside the general election. 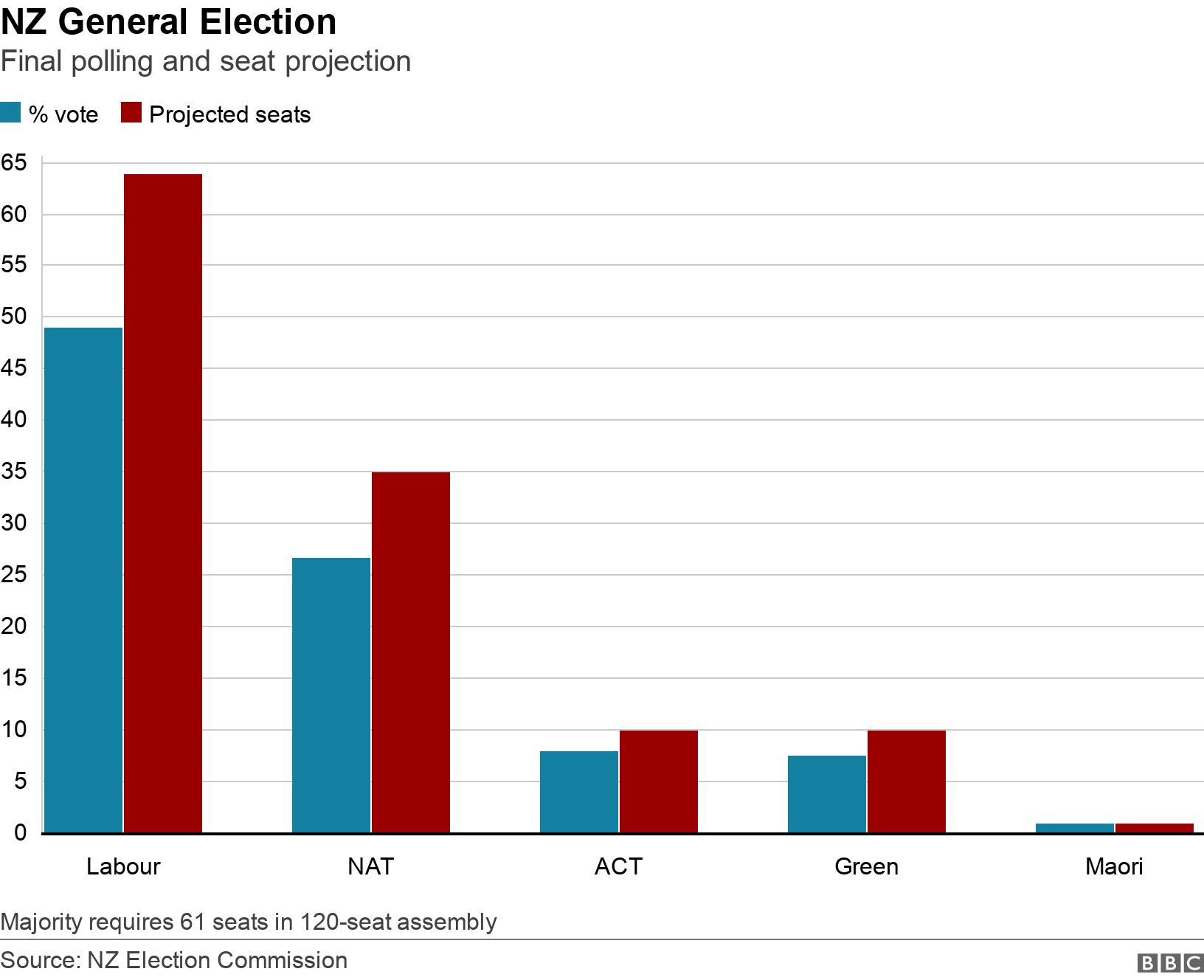 Ms Ardern, 40, told her supporters after the victory: “New Zealand has shown the Labour Party its greatest support in almost 50 years. We will not take your support for granted. And I can promise you we will be a party that governs for every New Zealander.”

National Party (NAT) leader Judith Collins congratulated Ms Ardern and promised her party would be a “robust opposition”.
“Three years will be gone in the blink of an eye,” she said, referring to the next scheduled election. “We will be back.”
No party had managed to win an outright majority in New Zealand since it introduced a voting system known as Mixed Member Proportional representation (MMP) in 1996.
Ms Ardern, who dubbed the poll “the Covid election”, pledged to instil more climate-friendly policies, boost funding for disadvantaged schools and raise income taxes on top earners.

By Shaimaa Khalil, BBC News
This was never going to be a nail-biting election. Opinion polls had comfortably put Ms Ardern on course to win a second term. The results have confirmed what everyone already knew.
The real question was how big Jacinda Ardern and her party were going to win and by anyone’s standard this is a remarkable victory.
It’s a big victory for a party that has been carried through by the star power of its leader. Ms Ardern has led New Zealand through a terrorist attack, a natural disaster and a global pandemic – and has done so focusing on kindness and compassion.
But things are going to be different during the second term. New Zealand is in recession for the first time in 11 years and Labour has been criticised for not having a clear Covid-19 recovery plan. A big bulk of the work is going to be turning the economy around with the pandemic still looming large.
It’ll take more than the Ms Ardern’s popularity and charisma to get that done.

What else did people vote on?

Aside from choosing their preferred candidate and party, New Zealanders were also asked to vote in two referendums: the end of life choice on euthanasia and cannabis legalisation.
The first aims to give terminally ill people the option of requesting assisted dying. This is a binding vote, which means it will be enacted if more than 50% vote “yes”.
The second is over whether the recreational use of cannabis should become legal.
This however, is not binding – which means even if a majority of people vote “yes” – cannabis might not become legal straight away. It would still be up to the incoming government to introduce a bill to legalise this.
Preliminary results for both referendums will be announced on 30 October.

How does NZ’s voting system work?

New Zealand has a general election every three years. Under its MMP system, voters are asked to vote twice – for their preferred party and for their electorate, or constituency, MP.
A party must receive more than 5% of the party vote or win an electorate seat to enter parliament, although there are guarantees for Maori candidates.
Parties usually have to work together, resulting in coalition governments.

In 2017, the National Party won the most seats, but could not form a government and Labour entered into a coalition with the Greens and New Zealand First, a nationalist party.

Weekly Report: Venezuela Lost Over $30 Billion Due To US Blockade

Weekly Report Venezuela In The News

Weekly Report Venezuela In The News