Hurricane season 2020 has been setting so many records, and the list is just getting longer. Last weekend, hurricane Delta struck Louisiana and lead to destructive flooding. Now, the focus turns to the Caribbean again. A new MJO wave will emerge from the west, into the extremely warm waters of the Caribbean Sea. Conditions are prone to a potential new strong tropical system next week, it would be Epsilon.

Although Louisiana is still recovering after the severe impact by hurricane Delta, focus now shifts into the Caribbean region. Delta was the 10th landfall in the United States mainland this season, a new record since 1916.

Typically, the tropical activity gradually shifts into the Caribbean region in October, which has been experiencing much above normal sea temperatures this year. Extremely warm sea temperatures are also spread deeper into the ocean waters.

While there is currently a moving tropical wave near the Leeward Islands, the Western Caribbean is cooking something bigger late next week. 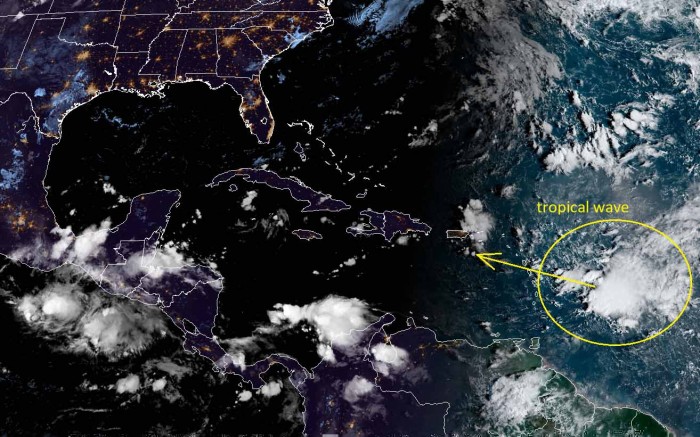 Weather models forecast that another MJO wave will enter the Caribbean region from the eastern Pacific. This is raising concerns that low pressure will form over the western Caribbean, leading to increasing thunderstorm activity and potentially towards the formation of a new tropical storm.

The official hurricane season for the Atlantic Basin (the Atlantic Ocean, the Caribbean Sea, and the Gulf of Mexico) is from June 1st to November 30th. The peak of the season is from mid-August to late October.

By mid-October, the 2020 hurricane season still has about 45 days left until we close the books at the end of the season.

At the beginning of the hurricane season, NOAA, TWC, and NCSU forecasters predicted: “There will be 13 to 22 named tropical storms in 2020, where 6-9 of those would reach hurricane strength, and 3-4 of them attaining major strength.” The official name list had 23 names reserved this year.

Moderate Showers Along With Thunder And lightning Forecasted For SVG