You Are Here Home Feature Fusarium Wilt : A Threat To Regional Economies And Food Security

Fusarium wilt of bananas, commonly known as Panama disease, is a destructive soil borne fungus that poses a threat to the production of all banana and plantain crops. Fusarium Wilt Tropical Race 4 has reappeared and is now a priority pest threatening the region’s banana industry with serious economic, livelihood and food security repercussions.

There are four races of the fungus Fusarium oxysporum f. sp. cubense (Foc):

Fusarium Wilt Tropical Race 4 (TR4) was discovered in Taiwan in the late 1980s and has since reached Asia, the Middle East and Africa. 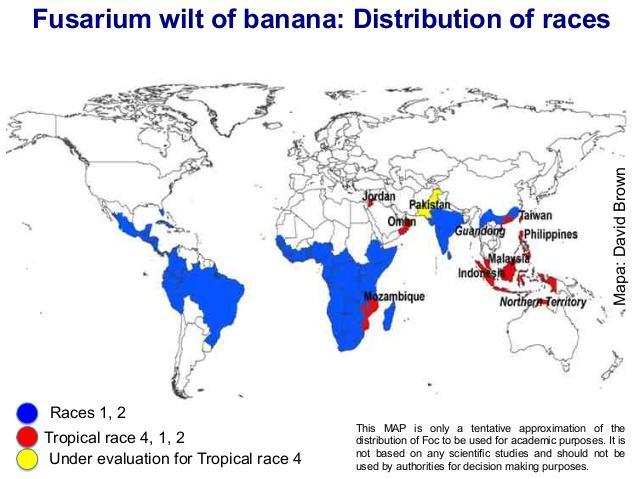 Based on the work done by the Caribbean Plant Health Directors’ Technical Working Group on Bananas (Musa species), a highly suspicious case of the Fusarium Wilt TR4 has been discovered in the Americas. This means that everything must be done to safeguard the region from the entry of this disease.

The fungus enters the plant through the roots and destroys the xylem vessels (vessels responsible for the movement of water and nutrients to the plant). As it progresses, the first external symptom of the disease is the irregular yellowing of the margins of older leaves followed by the collapse of the leaves along the leaf stalk and stem resulting in a skirt of dead leaves around the lower part of the plant, splitting of the pseudo stem at the  base of the plant and eventual plant death. 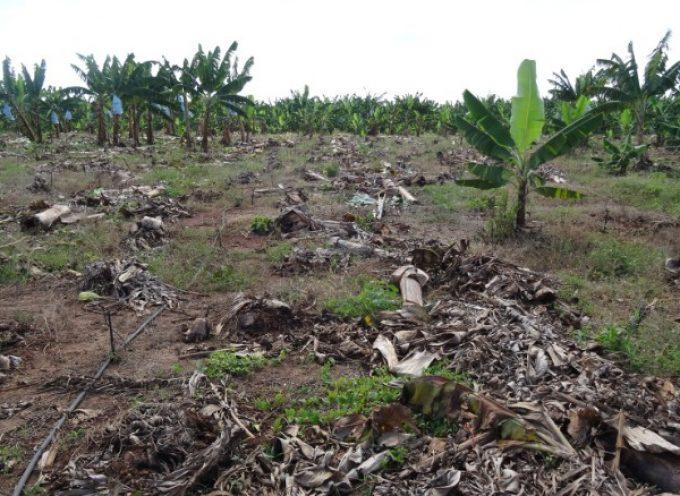 Banana Plantation affected by the fungus

Internal symptoms of the disease as seen in the photo (below) of the pseudo stem include a brownish discoloration of the inner tissue. The easiest way to observe these symptoms is to cut through the pseudo stem near ground level. The discoloration is usually seen as reddish brown or black lines running up and down the pseudo stem, or rings running around the cross section of tissue. Affected plants rarely produce marketable bunches. 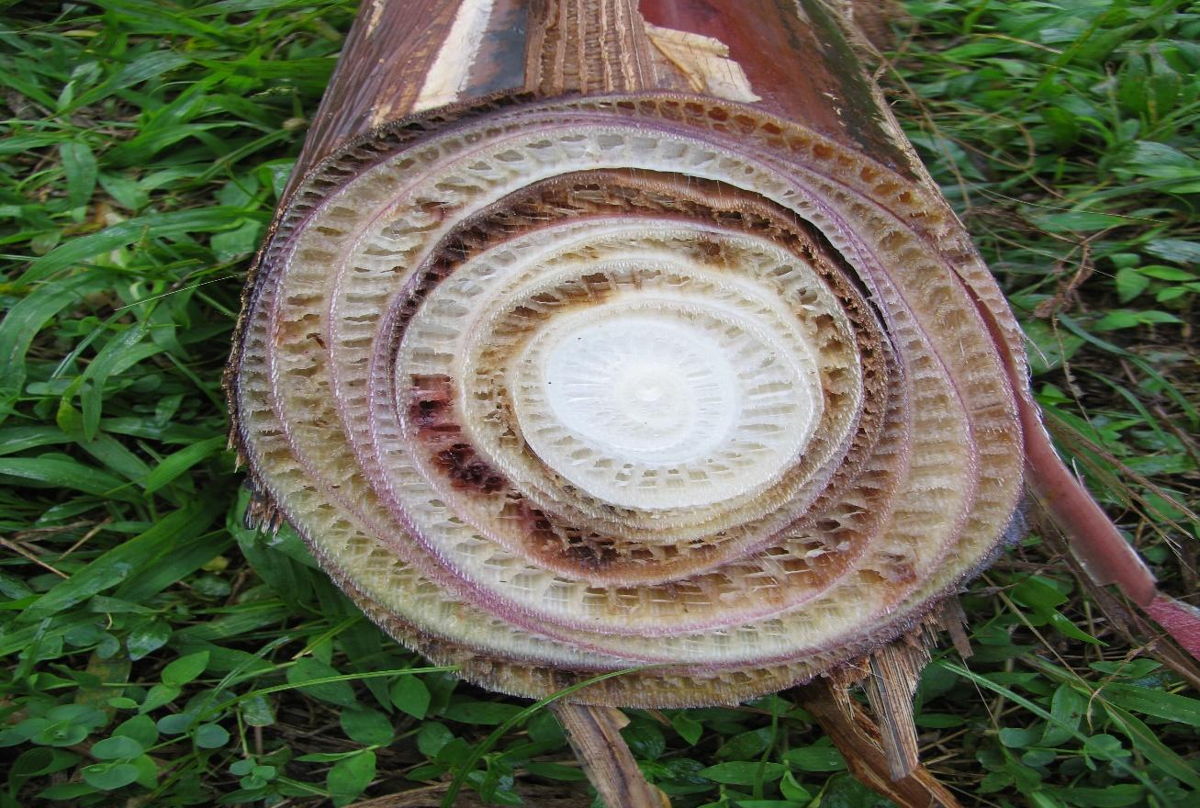 Mode of Spread and Pathways

The fungus spreads through infected plant materials and infested soil particles attached to any item such as farm tools, shoes, clothes, animals, equipment and vehicles. The infected plant material includes dead or dying plants, suckers and rhizome material that may not exhibit symptoms but can transmit the disease when planted in new areas. Furthermore it can spread with soil and water movement and through irrigation and drainage water.

Chemical control is not a possible option at this time given that the fungus, once established in soil, remains active and persistent for an indefinite time period. The most important measures to adopt include:

What Can You Do? Don’t Pack a Pest

As a travelling public you should declare all agricultural items and should not carry any soil or agricultural propagative or planting material without the required quarantine approval and import permits. Also you should report any suspected signs and symptoms consistent with the Fusarium Wilt to your Ministry or Department of Agriculture and follow all prevention and control recommendations.

What are Regional Bodies Doing?

The regional bodies within the Caribbean Plant Health Directors Forum (which include representatives of regional and international organisations, government entities, universities and laboratories of the OECS, FAO, IICA, CIRAD, CARDI, CABI, UWI, UTT, UFL, USDA/APHIS, CARICOM) have been working collaboratively to reinforce surveillance and quarantine procedures to reduce risks of entry and establishment of the Fusarium TR4.

The Technical Working Group on bananas, chaired by the Commonwealth of Dominica, has initiated action to strengthen hemispheric collaboration on initiatives and has highlighted priority and urgent areas for intervention to safeguard the region.

Preliminary discussions have also commenced between the IICA and the OECS and is also continuing among the other agencies like the FAO for the development of a plan to deal with this threat to food security and rural livelihoods.

Vincy Students In CUBA Sends Message Of Love And Hope

Pandemic Is Accelerating Democracy’s Decade-Long Decline In The Americas

Maintaining the Knot: How not to get a Divorce