During Rodriguez’s visit, both high-level officials will discuss “the progress of bilateral relations and matters of common interest,” Cubadebate reported, citing a Chinese Foreign Ministry spokesman.

The Cuban Minister is just coming off a three-day visit to Moscow where he, along with the Russian Foreign Minister Sergei Lavrov rejected “unilateral coercive measures” by the United States administration against Russia, Venezuela and Cuba.

Namely, the two talked about the recent application of Titles III and IV of the U.S. Helms-Burton Act by President Donald Trump and his cabinet, a move that violates international law.

“We are prepared to face the economic consequences deriving from [the U.S. sanctions and laws], knowing that they will always have economic and human costs, but they will never be able to bend our people’s will,” said Rodriguez, regarding the 1995-passed act that allows U.S. citizens and nationalized Cubans to use U.S. courts to sue companies that have invested in nationalized real estate since the Revolution in 1959. 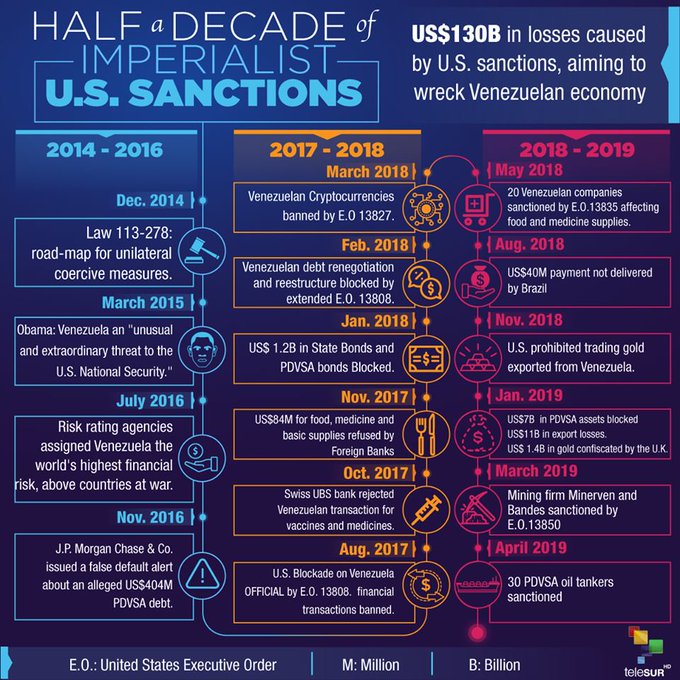 During his 72 hours in Beijing, Rodriguez is expected to consolidate support for Venezuela, a shared ally of China and Cuba.

“Each country’s internal affairs should be decided by its own people. External interference and sanctions will only exacerbate the tense situation and allow the law of the jungle to once again run amok,” said Minister Wang on March 8, regarding the new wave of U.S. actions against Venezuela and its population. The Chinese official warned then, “there’s already enough of these lessons in history and the same old disastrous road should not be followed.”

China is using its own arsenal of technological and business resources to tackle the U.S. administration’s May 10 application of tariffs on US$200 billion worth of Chinese goods and President Donald Trump’s blacklisting Chinese-owned Huawei and its subsidiaries. On May 21, Huawei announced it was introducing “Hongmeng” onto the market to substitute Google Android that said it would soon stop updating on Huawei technology.

In November 2018, Cuba’s President Miguel Diaz-Canel visited China where he met President Xi Jinping and agreed to boost ties between both countries.

In 1960 Cuba was the first Latin American country to establish diplomatic relations with the People’s Republic of China, formed in 1949.

China has long-supported Cuba in the United Nations and other international forums, voting to lift the U.S. blockade on the island nation.