Leaders in Latin America and the world rejected Tuesday the coup against the Venezuelan government of Nicolas Maduro which was launched by opposition lawmaker Juan Guaido, who illegally self-proclaimed himself “interim president” in January with the support of the United States and its regional right-wing allies.

Early Tuesday morning, Bolivian President Evo Morales tweeted, “We strongly condemn the coup attempt in Venezuela performed by the right wing, which is submissive to foreign interests. Confident that the courageous Bolivarian Revolution at the head of the brother Nicolas Maduro, will be imposed on this new attack of the empire.” 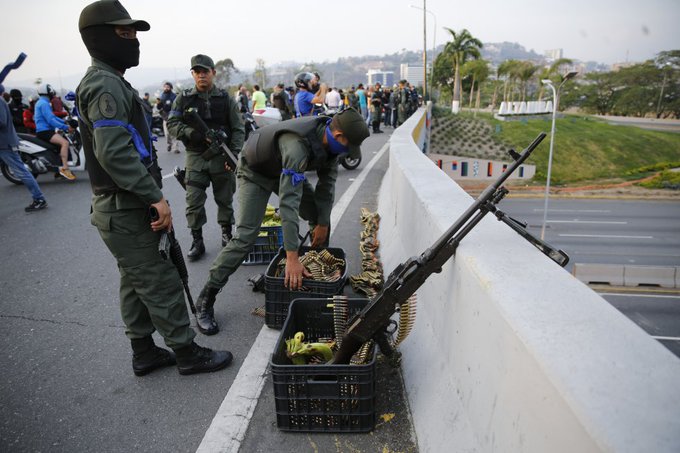 “Venezuela’s peaceful opposition wanting to turn their country into another Iraq or Libya for the benefit of Trump and his fascist satellites. No to the coup d’etat. Hands Off Venezuela. They will not pass.”

Venezuelan minister Vladimir Padrino assured that the military personnel “stand firm in defense of the National Constitution and its legitimate authorities.”

In that sense, he explained that all the military units deployed in the country’s eight defense regions report normalcy in their military bases and remain under the command of their legitimate commanders.

From Cuba, President Miguel Diaz-Canel also rejected the attempted coup and pointed out that it is promoted by those who try to violently overthrow the Bolivarian Revolution.

In his Twitter account, the Cuban leader said: “We reject this coup that aims to fill the country with violence. The traitors who have placed themselves at the forefront of this subversive movement have used troops and police with weapons of war on a public road in the city to create anxiety and terror. “

Firm support and solidarity from Cuba to the Constitutional President of that sister nation, Nicolas Maduro, to his government and to the Bolivarian and Chavista people.”

Joe Biden Sworn In As The 46th President Of United States